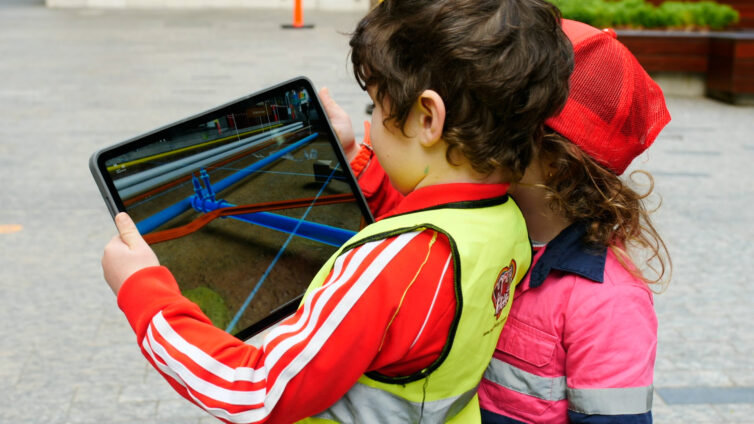 Urban Utilities, alongside delivery partners Diona and Mott MacDonald, embraced augmented reality to engage the community as part of an upgrade to water infrastructure in Brisbane’s Queen Street Mall.

The project involves installing a new water pipe under the pedestrian mall and is part of Urban Utilities’ wider $70 million ten-year works to proactively upgrade water mains in the CBD.

Urban Utilities Water Program Manager Daniel Muir said the bustling mall, which welcomes around 70,000 visitors daily, was an ideal location to trial the public-facing technology on a smaller scale.

“Many people are unaware of our vast underground network so we wanted to create an immersive experience the community could interact with to learn more about the works and what goes on behind-the-scenes to deliver fresh water to their taps,” he said.

Mr Muir said signage at the works features a QR code which makes it easy for the public to download the ‘DionAR’ app on their phones or tablets to use the augmented reality (AR).

“People can download the app and view our underground assets to see just how much lies beneath the streets,” he said.

“The technology integrates 3D models with the real world to show the infrastructure in its true size and location – there’s also a ‘gamification’ element to boost engagement, with dinosaur bones and a treasure chest added among the pipes for children to find.

“The augmented reality provides a simple to use, information rich visual tool to clearly explain planned works to nearby businesses, council and the public so they can understand exactly what’s happening and why the works are important to the local area.”

“We have also trialled a non-public facing version of the technology for a project which involved relocating a sewer pump station to Grey Street in South Brisbane as part of the Brisbane Metro early works program,” he said.

“The majority of this structure is underground so the augmented reality enables the impressive scale of the features to be viewed to assist with maintenance, planning and training.”

Mr Muir said the model could now form the foundations of a digital twin (DT) which Urban Utilities could use to assist in operations and maintenance in the future.
“The industry is increasingly adopting the approach of digital assets where a digital model can be updated with asset information such as age, maintenance requirements and condition,” he said.

“We live in a 3D world and this technology means works can be clearly explained and planned from the office by projecting the 3D digital model onto a flat surface.

“We’re excited to see the potential future applications of the augmented reality technology and we hope to use it for other suitable projects going forward.”