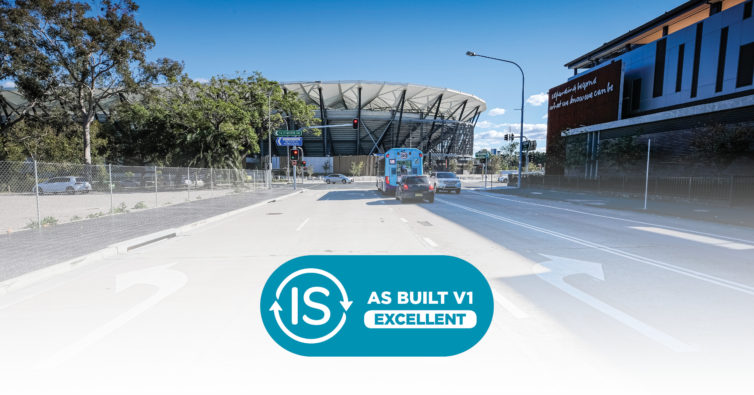 The Stage 1 of the Parramatta Light Rail (PLR) Enabling Works project has achieved an “Excellent” IS As-Built rating under the Infrastructure Sustainability Council of Australia (ISCA) rating scheme. This rating resulted from a score of 60.54 points which exceeded contract requirements.

“This is the first time Diona has undertaken a rating process with ISCA, and we are excited to have achieved such a positive result. The rating process has led to learnings and improvements in both the systems and operations of the business, and we each look forward to applying these improvements on future ratings and all of our respective projects nationally,” said Chris Arrington, National Environmental and Community Manager.

The Enabling Works portion of the Parramatta Light Rail involved the final design and construction of specific local road improvements and adjustments to maintain the performance of the road network during light rail construction and operations. The Enabling Works facilitated the later stages of the Parramatta Light Rail construction program. As part of the project, George Street in the Parramatta CBD became two-way, and O’Connell Street in North Parramatta was widened to four lanes. Greater traffic capacity was also provided along Barney and O’Connell Streets in North Parramatta as an alternative to Church Street (where light rail will operate), to minimise disruption and improve traffic flow.

Highlights of the sustainability initiatives for the project

35.2% reduction in water use across construction

Numerous initiatives were implemented to reduce water consumption and increase potable water replacement across the infrastructure lifecycle. The initiatives included:

The reduction in water usage also led to the award of an innovation point for exceeding the credit benchmark.

A number of initiatives were employed to achieve this result including:

The project monitored and demonstrated maintenance of heritage values in line with the project Heritage Interpretation Strategy resulting in enhancement achieved by re-using salvaged sandstone blocks from North Paramatta as curbing along O’Connell Street in North Parramatta and in works along the Queens Wharf Reserve in Parramatta. Re-use of materials evidenced the incorporation and connection of the works to the historical remains and “enhancement” of heritage values at these locations due to the project works.

It is acknowledged that this “Excellent” Rating has been the result of the collaborative effort of multiple stakeholders including: