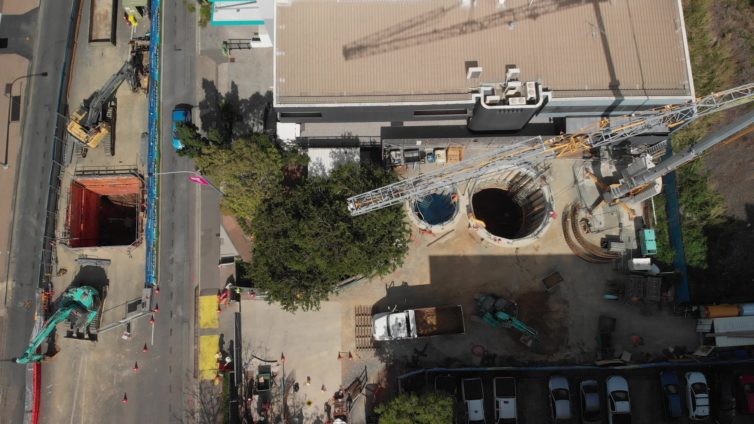 With the Australian Government set to spend $110 billion over the next 10 years on infrastructure programs as part of the National Economic Recovery Plan, a critical path for these large projects is enabling works. As relocating utilities within these congested urban environments is complex in nature, early contractor engagement can prevent delays, lower risk and minimise impact on the community.

Specialising in complex water, wastewater, gas and electrical utilities works, Diona has delivered essential community infrastructure in Australia for more than 40 years. During that time, the company has seen a shift in ways of working with an increasing focus on involving contactors earlier in design and construction projects with a focus on proactive risk mitigation. This approach has made project delivery more efficient, reducing overall project costs by around 26 per cent. Diona’s work on the $30 million Ausgrid Eastern CBD project in Sydney was a great example of how early contractor involvement improved constructability with considerable savings to the client across the delivery phase with value engineered out problems and route selection.

Other major utilities relocations and installations nationally have included projects such as:

More recently, Diona was successfully engaged through a tender process on the complex sewer infrastructure relocation in South Brisbane as part of the Brisbane Metro early works. These works required diversion of the sewer infrastructure in order to maintain the network’s functionality. The current sewerage pump station (SPS) needed to be relocated to 63 Grey Street in South Brisbane. The scope also required construction of a trunk gravity sewer system from the existing SPS to the newly constructed SPS 266 and a new sewer rising main (SRM) from SPS 266 to the Victoria Bridge abutment (Stanley Street loop road).

Through separate tender processes, Diona was engaged to deliver both packages of work simultaneously which provided Brisbane City Council and Urban Utilities with a single interface and created efficiencies across the project.

“The project has been a milestone for the Queensland team, and it was incredible to work on a project that had such a challenging scope,” says Diona Queensland State Manager Richard Willis.

“We had to build a 17 m deep structure beside a high-rise building, on a very congested site. There were numerous constraints around working in the vicinity of high-rise buildings, protected trees, customer impacts, deep excavations, confined spaces, temporary works design, traffic management and trenchless works. Early engagement with our
in-house crews during the planning phase was critical to the success of the project and much of the innovation in our approach came from our teams on the ground.

“Through our early engagement with the client, we engineered a solution that involved two circular piled shafts for the wet well and grit chamber, significantly reducing the footprint required to construct the 17 m deep pump station. This solution also had great benefits during construction such as reducing noise and vibration impact to nearby buildings, making the excavation watertight, and the piling rig was utilised to pre-drill the rock prior to excavation.”

The project also included significant microtunnelling works involving a 250 m x 1.2 m diameter microtunnel at 12 m depth under Grey Street and a 36 m tunnel into the pump station through varied ground conditions. The team used a combination of slide rail boxes and shotcreting to access the required depth for the tunnel boring machine to minimise vibration and noise impact to the surrounding area.

Diona engaged specialists Rob Carr at pre-tender stage and, through its extensive experience and invaluable technical expertise, the tunnelling works were completed ahead of the Christmas period reducing impacts to the heritage listed Queensland Museum and Queensland Performing Arts Centre, and local community during a busy period.

Diona also completed dual trench installation of the rising main and Energex conduit through the Queensland Cultural Centre precinct, which was heavily congested with multiple utilities. The sewer rising main also consisted of 50 m of sewer pipe with an outside diameter of 324 mm suspended from the Victoria Bridge abutment (Stanley Street Bridge underpass) before tying into the existing SRM on the Victoria Bridge abutment.

Keeping its crews and the community safe during the works was the top priority for Diona. During the project, Diona launched its CareFactor Program, aimed at taking safety beyond compliance and building a safety culture around trust, care and mateship.

“We engaged Clive Lloyd from GYST Consulting who delivered the program to our operational leaders. We’ve seen a significant mindset shift amongst our crews and higher levels of engagement around risk management,” says Mr Willis.

“Thanks to the great leadership from our site supervision and engagement with our crews at every stage, this project has been completed with zero lost time injuries.”

Despite all the challenges of working within the CBD location, managing major traffic switches, maintaining access for buses and pedestrians, and managing multiple stakeholders, the works are scheduled to be completed on time.

“This project is a great example of the power of engaging early with the local market and specialist engineering companies such as Diona who self-perform this work.”

Already one of Australia’s most trusted engineering companies, Diona continues to grow within the utility and facilities infrastructure sector. With three major framework agreements in the water space and continued success within the power sector, the company is showing no signs of slowing down and is evolving and expanding their service offering.

“The business will be moving into an increased focus on sustainability and renewables. We’ve recently acquired some geothermal rigs which are working across the company and emerging into the solar and hydrogen markets. We have also increased our specialised power equipment over the year and now have one of the largest cable plant set-ups.

“We’re providing essential services to communities. We take a lot of pride in doing that work and making sure that we’re providing a safe pair of hands for our clients and helping the communities we work in thrive.”